This greeted us as we entered the Transplant wing at Jewish on Monday, January 6, 2014. Dad’s part of that growing statistic now.

This exact time last year, I was in a freezing cold hotel room across from Jewish Hospital where me, Sonny and his family, and my Aunt Lou were trying to get bedded down for a short sleep. After waiting a full day with no definitive answer, we had just gotten news about an hour prior that Dad’s liver transplant surgery would take place around 9am on Tuesday, January 7th, 2014. We were all in a sort of semi-shock that this was all really happening and sleep proved quite elusive, both from the nerves/anticipation and from the fact that thanks to the first Polar Vortex of the year, our hotel room never got above 68 degrees with a wind chill of -34. Payne talked in his sleep the whole night. I had to pee at least 4 times in the 5 short hours we were there. Needless to say, when you’re waiting on a miracle that’s nearly in your grasp, restful sleep is not at the top of the list. 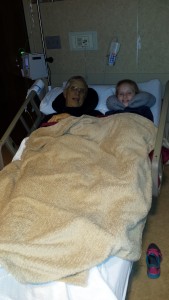 Graycen snuggling with Granddaddy as we waiting to find out if surgery was actually going to take place or not.

But the next day came, and we trudged across to the hospital in literal sub-zero temps to wait through a 10-hour surgery that would prove to save Dad’s life in more ways than one. We will all never forget that as they wheeled him away to the operating room, he waved to us and said, “I’ll be fine. See you later!”

This moment was surreal.

We all witnessed a miracle that day. We heard doctors say words that we never thought we would hear. We saw not only his life, but our lives changed forever as we now count this as Dad’s “second birthday.”

The day he arrived home after only 8 days in the hospital!

We could not be more thankful for the gifts we’ve been given – the gift of more life with Dad, the reward of seeing true belief and faith come to full fruition (even when the days of waiting were hard and the doubt so easily crept in.)

Christmas 2015 THE DIFFERENCE A YEAR (with a new liver) MAKES!!!

So, Happy Second Birthday, Dad. You’re more than a miracle!